Not everything is a lesson to be learned. Some things just are. They stand alone. Like the post I wrote a week and a half ago. I was writing honestly, but I wasn’t weeping as I wrote it. I’m not in recovery. I wasn’t looking for a happy ending. It was…is how I felt.

We take many experiences from life and purposefully place the word ‘learn’ in front of it. We choose to grow and change. I love that about life. We can mold it and shape it, make what we want of it. There are some things, however, that we simply survive. We get through. And that’s okay. That’s enough. It is the best we can do.

Sometimes it’s not about bettering ourselves. Maybe that contradicts what I have said here in this space, in the past. But, I stand by it. I stand by both – the bettering and the not – because I think it’s both. Always both. It’s being and doing. It’s living in the muck and standing at the edge marveling at how dirty your clothes are. It’s shedding those clothes, knowing where you’ve come from, and walking in a different direction.

When I write about the car crash I’m not in the aftermath. Not anymore. Not for a long time, now. I’m not reeling from the fire and the damage done to my body. It is not the first thing I think of when I wake up. It doesn’t even make an appearance in the nightly ritual of going over my day as I drift off to sleep. It has impacted me. It has left its mark, but it isn’t everything. It isn’t my center. Sometimes I’m just telling the story. 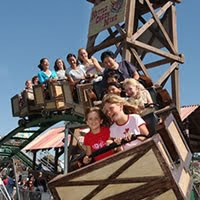 In Playland
The kids and I went on Thursday and had a great time. And by ‘great time’ I mean I had my absolute favorite fair food…mini donuts. The sugar, the fat, the warmth as it’s served fresh from the giant vat of oil…does it get any better than that? We really did have a great time. The kids went on every ride twice. They were so well behaved that I thought, what the hell, let’s stay for another hour. In mom and kid time that’s, like, seven hours. Gone are the days where I am yelling, “Stop!” at Ben at the top of my lungs as he runs away from me in some race I didn’t know we were in while people stop to watch. I didn’t get any snark from Annie and both the kids didn’t get any snark from me. It was a good day.

This is just a photo off of the Playland website. There was a photo of Annie and Ben taken on this ride, the Kettle Creek Mine Coaster. It shows up at the booth at the end of the ride. If it wasn’t a ridiculous amount of money I would have bought it. Their faces were hysterical, especially Ben’s. If you know Ben you can imagine what he would have looked like…the windblown hair, the I-might-pee-my-pants-I’m-kinda-freaked-out-but-I-think-I-like-this look in his eyes…

16 thoughts on “clearing the air”